The Windows 7 Sins campaign is over, but our work isn't finished. Tell Microsoft to #UpcycleWindows7 and set it free.

Translations of this page

With Windows 7, Microsoft is asserting legal control over your computer and is using this power to abuse computer users.

Microsoft has been found guilty of monopolistic behavior all over the world. With Windows Vista, Microsoft worked with PC manufacturers to significantly increase the hardware specifications for the standard user-experience, causing people to require new computers to run the updated OS.

Early versions of Windows 3.1, relying on an underlying version of the DOS operating system would throw an error if non-Microsoft DOS, such as Digital Research's DR-DOS, were detected. At one point, Microsoft CEO Bill Gates, in an internal memo said "You never sent me a response on the question of what things an app would do that would make it run with MS-DOS and not run with DR-DOS. Is there [sic] feature they have that might get in our way?" with Microsoft Senior Vice President Brad Silverberg later sent another memo, stating: "What the [user] is supposed to do is feel uncomfortable, and when he has bugs, suspect that the problem is DR-DOS and then go out to buy MS-DOS."

Microsoft recently tried to sell a bunch of patents which would threaten GNU/Linux to patent-trolls, but the patents were eventually purchased by the Open Innovation Network, a group with patents to protect free software.

In recent months, we've seen Amazon.co.uk is starting to make Windows refunds quick and easy for GNU/Linux users buying netbook computers. Whether this will become a growing trend, who knows?

Worse, most PC manufacturers still do not offer you the opportunity to buy a machine without Windows. 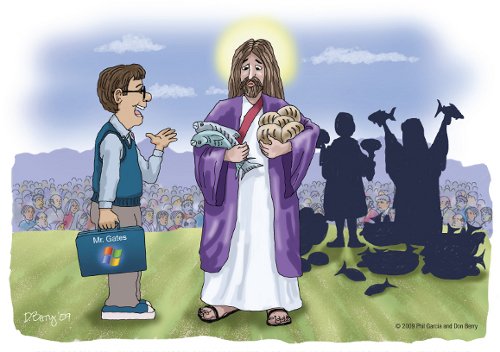 “I'm sorry, Mr. Christ. You're only licensed for five loaves of bread and two fish.”

Traditionally, building your own machine was a way to get around the Windows tax. Microsoft has managed to hurt this, too. Sites such as NewEgg have many of their best deals tied to a purchase of an OEM copy of Windows, penalizing those who actively seek to avoid Microsoft and other proprietary software companies in the name of freedom.

The monopoly of Windows isn't just limited to the direct influence of Microsoft's products: many computer manufacturers only ship machines with Windows, because of bundling deals with other software companies, loading up the machine with a variety of proprietary software, including trial offers for Internet providers and other junkware.

Free software doesn't have this problem: There cannot be a monopoly on free software, because everybody has the source code and everybody can change the software and distribute modified versions. While some major PC manufacturers are flirting with the idea of selling machines running GNU/Linux, all major PC manufacturers are still heavily advocating the use of proprietary software, by virtue of their relationship with Microsoft.

Bill Gates/Jesus cartoon by Phil Garcia and Don Berry. Verbatim copying and distribution of the cartoon are premitted without royalty in any medium provided this notice and the copyright notice are preserved.

This page is licensed under the Creative Commons Attribution-No Derivative Works 3.0 License.

To view a copy of this license, visit http://creativecommons.org/licenses/by-nd/3.0/us/ or send a letter to Creative Commons, 171 Second Street, Suite 300, San Francisco, California, 94105, USA.

Translations of this page